By paulfcockburn on 5 March, 2015 in Arts & Culture, Popular Science 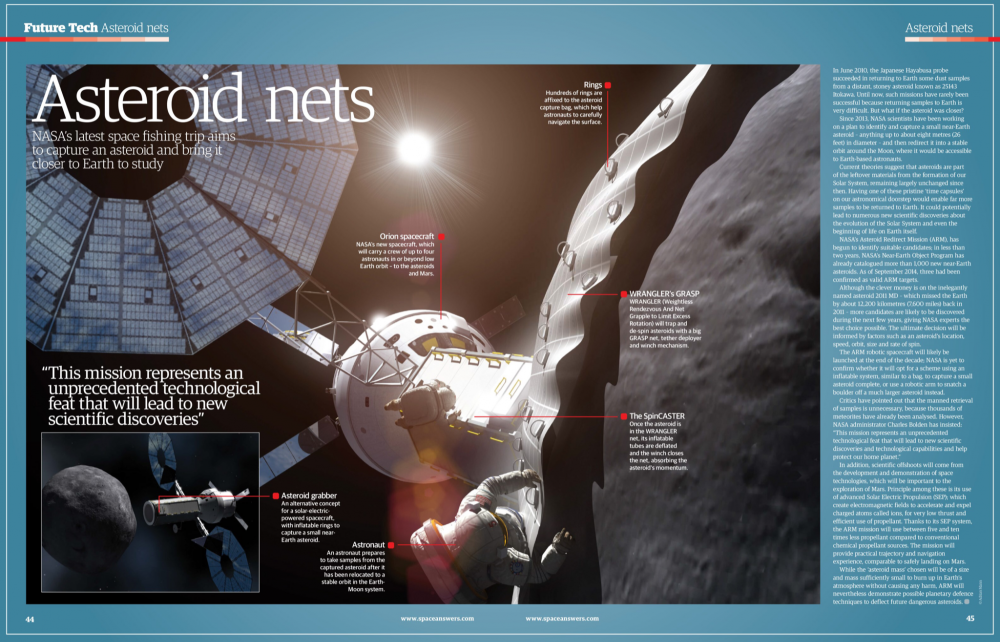 NASA’s latest space fishing trip aims to capture an asteroid and bring it closer to Earth to study.

In June 2010, the Japanese Hayabusa probe succeeded in returning to Earth some dust samples from a distant, stoney asteroid known as 25143 Itokawa. Up to now, however, such missions have rarely been successful, not least because of the challenges that come from returning anything safely to Earth. But what if the target asteroid was, comparatively speaking, a lot closer?

Since 2013, scientists working for American Space Agency NASA have been seriously working on a plan to identify and capture a small near-Earth asteroid – anything up to 8m (26 feet) in diameter – and then redirect it into a stable orbit around the Moon, from where it would be far more easily accessible to Earth-based astronauts.

Current theories suggest that asteroids are part of the left-over materials from the formation of our solar system, and have remained largely unchanged since then. Having one of these pristine “time capsules” on our doorstep, astronomically speaking, would enable far more samples to be returned to Earth, potentially leading to numerous new scientific discoveries about the evolution of the solar system and even the beginning of life on Earth itself.

Although still in its relatively early stages, NASA’s Asteroid Redirect Mission (ARM), working with many astronomers around the world, has begun to identify suitable candidates; in less than two years, NASA’s Near-Earth Object Observation Program has already catalogued more than 1,000 new near-Earth asteroids, of which – as of June 2014 – some 20 had been confirmed as possible ARM targets.

Although the clever money is on the inelegantly-named asteroid 2011 MD — which missed the Earth by about 12,200km (7,600 miles) back in 2011 — more candidates are likely to be discovered during the next few years, giving NASA experts the best choice possible. The ultimate decision will be informed by factors such as the asteroids’ location, speed, orbit, size and rate of spin.

The ARM robotic spacecraft is likely to be launched at the end of the decade; NASA has yet to confirm whether it will opt for a scheme using an inflatable system, similar to a bag, to capture a small asteroid complete, or to instead use a robotic arm to snatch a boulder off from a much larger asteroid.

Critics have pointed out that the manned retrieval of samples is unnecessary, not least because thousands of meteorites have already been analysed. However, NASA Administrator Charles Bolden has insisted: “This mission represents an unprecedented technological feat that will lead to new scientific discoveries and technological capabilities and help protect our home planet.”

For, in addition to the direct scientific results from the samples, expected offshoots will come from the development and demonstration of space technologies which will be of particular importance, not least to the exploration of Mars likely in the 2030s onwards.

Principle among these is its use of advanced Solar Electric Propulsion (SEP) technologies; these use electricity from solar arrays to create electromagnetic fields to accelerate and expel charged atoms called ions, creating a very low thrust through a very efficient use of propellant. Thanks to its SEP system, the ARM mission will use between five and 10 times less propellant when compared to conventional chemical propellant sources.

The mission will also provide practical trajectory and navigation  experience which will be comparable to safely reaching and landing on Mars.

In addition, while the “asteroid mass” chosen will be of a size and mass sufficiently small to burn up in Earth’s atmosphere without causing any harm, ARM will nevertheless demonstrate possible planetary defence techniques to deflect dangerous asteroids, not least into stable lunar orbit away from the Earth.

First published in All About Space, #36

All About Space, Imagine Publishing

Steel Lady of the Forth
Ginger Mag