By paulfcockburn on 16 February, 2015 in Arts & Culture, Disability 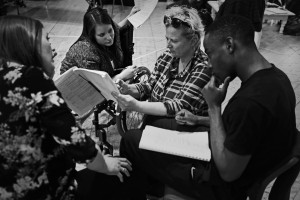 Blood Wedding is an acclaimed tragedy by the Spanish dramatist Federico García Lorca. First performed in 1933, it focuses on the troubled inter-family feuds reawakened by a forthcoming marriage.

This new adaptation by the award-winning writer, director and actor David Ireland brings London-based Graeae, Dundee Rep Ensemble and Derby Theatre together in a radical new twist to the classic tale, with a production combining BSL interpretation, captioning, audio description and a multi-ability cast.

So how did this new production come about?

“I was invited by Jemima Levick, joint-Artistic Director at Dundee Rep to do some workshops in and around the aesthetics of access, the way Graeae likes to work,” explains Graeae’s artistic director Jenny Sealey, who is directing the play. “From that we then decided it would be great if the two companies could do a co-production, and we spent a development week with some of the actors from the Dundee Rep Ensemble, and some from Graeae’s mix of actors, looking at a few plays including Lorca’s Blood Wedding. That was our favourite; both Jemima and I were really keen to bring it to the present day, to set it in the city – rather than the hot Spanish countryside – and to see what happened. Then Derby Theatre became really interested in the production as well, so now we have Graeae, Dundee and Derby.”

Given Graeae’s tradition of using diverse casts, did you give Ireland any particular instructions regarding his adaptation of the play, apart from wanting a contemporary urban setting?

“The only note that I gave David, the only thing I did know was that I wanted the character of the mother to be deaf. The fact that she doesn’t want her son to go becomes even more profound because he’s the person she relies on; he’s her ears. Her being surrounded by all the hearing people at the wedding makes him feel awkward, he has to try to be the ‘host with the most’, and yet also has to translate for his mum, who is asking really difficult questions. Her deafness gave such depth to the groom, and the whole play, because it’s about communicating and not communicating, and sometimes communicating things that you don’t want to be seen.”

Was this a deliberate choice on your part?

“No. It just so happened during the development week; if I hadn’t had a deaf actor playing the mother, it might have been a very different story. It was just something that was really born out of development.”

On the day of this interview, you’re three weeks into the rehearsal period; are you enjoying it?

“My god, yeah. It’s brilliant having this very diverse ensemble. Some have worked together before, but some really who have not. The only people I’ve worked with before in the cast are Gerard McDermott (I did Blasted with him in 2006) and Alison Baskerville, who has worked with Graeae on The Iron Man. This is very, very different; we’re all on a massive journey of finding out what is what, and communication continues to be the beautiful dilemma.”

“EJ Raymond, who’s playing the mother, is fantastic. She has a really beautiful, profound deaf voice, but I know that for some hearing people… they can’t always hear what she saying. So everything is captioned. For blind audiences, though, it’s a whole other area of having to tune in to what it is she’s saying. Making sure that deafness is accessible to blind people in the audience — that’s quite an interesting one. I think it is one of these things that we’ll ‘have to suck it and see’.

“There’s also the whole area of family signing, because it’s not pure BSL (British Sign Language). It’s casual, sometimes it’s with just one hand, sometimes it’s lipreading, it’s a very specific. That’s another communications dilemma because, if the diehard BSL community are expecting this to be a fully-fledged BSL production, it’s not — it can’t be, because of the characters. During the wedding scene, they book an ‘interpreter’ for the wedding to ‘help mum’ – so there are moments where we have flashes of real interpretation on stage – but we can’t have that interpreter throughout the whole of it, because that’s not what the play is about.

“I think the play is about what you see and hear, what you don’t see and hear, and you, the audience, have to fill in the gaps. I think that’s what Lorca does; most action in Lorca happens off stage. I’m still trying to follow that thematic desire of Lorca, but we are necessarily showing and saying more than he’d probably allow. David Ireland has remained very faithful to Lorca, and then I’m the last person in the mix – I just ruffle it up a bit more!”

Building on the Past
Lea Cummings (Review)