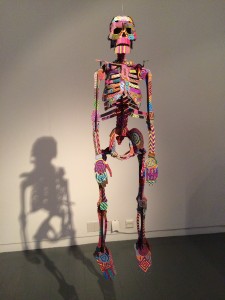 Given the rumbustious, often destructive (and usually site-specific) nature of much of ‘transcendental noise artist’ Lea Cumming’s work, it’s hardly surprising that he has not enjoyed the level of critical exposure which tends to accompany gallery-based public exhibitions. This first solo exhibition in Glasgow’s Project Ability Gallery is, therefore, significant even though it only gives a glimpse of some aspects of his work.

The exhibition at Project Ability is down to the support Cummings received from Unlimited 2014 for a year-long studio project to “explore the spiritual aspects of physical reality, ritual performance and the role of human beings within the universe”. According to the introductory information, Cummings’ intention was to “create the development of an experience that transports audiences into a mystical, magical place outside daily reality.”

Apart from one video – “Temple of Kovorox Sound” is partly an explanation of his chosen subject matter, partly a distracting video montage in its own right – and two installations which use movement and vibration to bring the seemingly dead to “life” – the majority of his work here are images created on paper using coloured pens. Though Cummings might argue against the term “created”; these, he tells us, are drawn with as little conscious intent as possible. “I have no plan except to fill the blank sheet of paper using the pens,” he says. “I try to keep my mind blank when working on them so as not to corrupt the flow of images.”

The results are bright, gaudy, eye-watering; a miasma of swirling lines, circles, triangles, boxes, jagged shapes and patterns – some of which the observer must work hard not to interpret as three dimensional. Because that level of interpretation is ultimately a dead-end; created with as little conscious thought possible, it’s surely best to view them in the same manner, to simply drink in the colours and shapes.

Many of these works are A2 in size, although others are smaller; eight roughly-A4 drawings are displayed in a row, each remaining isolated within its own bland framing. This contrasts with a 15-piece work titled “Lifeforce”, consisting of 15 A4 drawings hung tightly together in three rows of five. The conscious mind looks initially for continuations and continuity between one drawing and the next, but there isn’t any beyond certain repetitions of colours and patterns, and a wider geometry of shapes across the whole piece. Again, it is a work perhaps best taken in slowly, without too much thought.

To what extent the creation of these “transmissions from the human subconscious” (as he terms them) enable Cummings to “tap into the universal energy field and express its forms and patterns” is, of course, debatable. In certain works you can see patterns of dots and textures which appear almost “aboriginal”; whether these signify the great unwashed human subconscious breaking through, or are simply an unconscious appropriation on Cummings part (that’s then given meaning in hindsight), is delightfully uncertain. Certainly, the viewer is left somewhat dazed afterwards.

Review first published on 16/02/2015 by DisabilityArtsOnline.

Blood Wedding
Steel Lady of the Forth