Steel Lady of the Forth 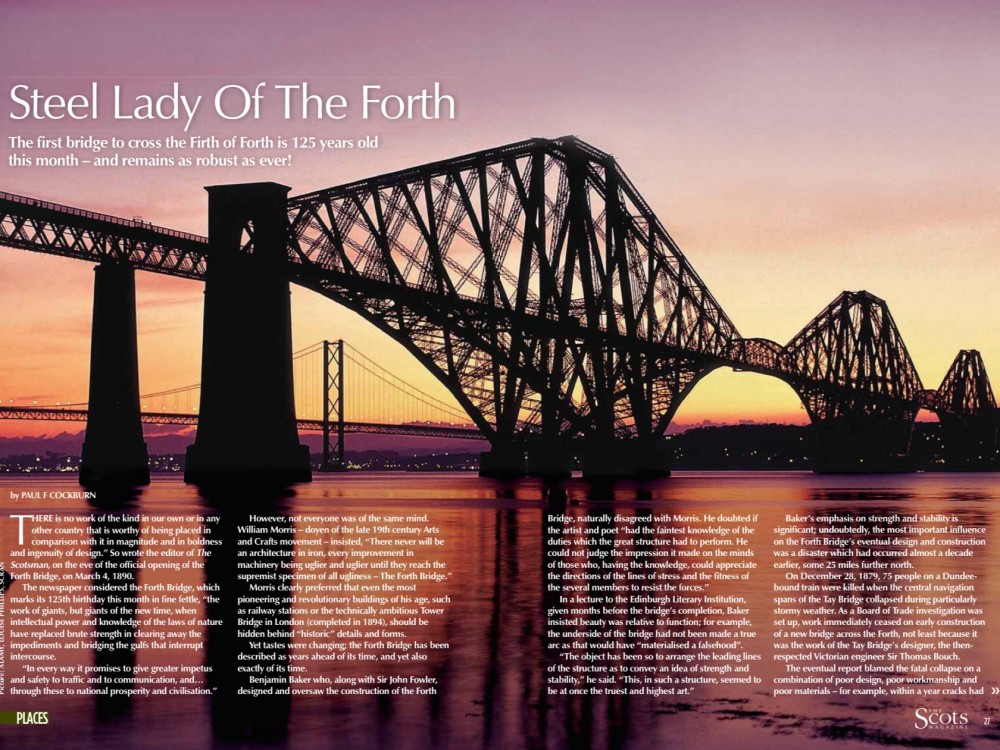 “There is no work of the kind in our own or in any other country that is worthy of being placed in comparison with it in magnitude and in boldness and ingenuity of design.” So wrote the editor of The Scotsman, on the eve of the official opening of the Forth Bridge, on March 4th 1890.

The newspaper considered the Forth Bridge, which marks its 125th birthday this month in fine fettle, as “the work of giants, but giants of the new time, when intellectual power and knowledge of the laws of nature have replaced brute strength in clearing away the impediments and bridging the gulfs that interrupt intercourse.

“In every way it promises to give greater impetus and safety to traffic and to communication, and, of course, through these to national prosperity and civilisation,” the editor added.

However, not everyone agreed. William Morris – doyen of the late 19th century Arts and Crafts movement – insisted: “There never will be an architecture in iron, every improvement in machinery being uglier and uglier until they reach the supremist specimen of all ugliness – The Forth Bridge.”

Morris clearly preferred even the most pioneering and revolutionary buildings of his age, such as railway stations or the technically ambitious Tower Bridge in London (completed in 1894), hidden behind “historic” details and forms.    Yet tastes were changing; the Forth Bridge has been described as years ahead of its time, and yet also exactly of its time.

Benjamin Baker who, along with Sir John Fowler, designed and oversaw the construction of the Forth Bridge, naturally disagreed with Morris. He doubted if the artist and poet “had the faintest knowledge of the duties which the great structure had to perform. He could not judge the impression it made on the minds of those who, having the knowledge, could appreciate the directions of the lines of stress and the fitness of the several members to resist the forces.”

Indeed, in a lecture to the Edinburgh Literary Institution, given just a couple of months before the Bridge’s completion, Baker insisted that beauty was relative to function; for example, the underside of the Bridge had not been made a true arc as that would have “materialised a falsehood”.

“The object has been so to arrange the leading lines of the structure as to convey an idea of strength and stability,” he said. “This, in such a structure, seemed to be at once the truest and highest art.”

Baker’s emphasis on strength and stability, is significant; undoubtedly, the most important influence on the Forth Bridge’s eventual design and construction was a disaster which had occurred almost a decade earlier, some 25 miles further north.

On 28 December 1879, 75 people on a Dundee-bound train were killed when the central navigation spans of the Tay Bridge collapsed during particularly stormy weather. As a Board of Trade investigation was established, work immediately ceased on the early construction of a new bridge across the Forth, not least because it was the work of the Tay Bridge’s designer, the then-respected Victorian engineer Sir Thomas Bouch.

The eventual report blamed the fatal collapse on a combination of poor design, poor workmanship and poor materials – for example, within a year cracks had appeared in the Tay Bridge’s columns and tie bars, which had been cheaply patched up. While the intense competition between competing railway companies as they hurtled north was undoubtedly a significant factor in this fatal cost-cutting, the blame ultimately fell on the shoulders of the bridge’s designer.

Unsurprisingly, Bouch’s by then well-advanced plans for a suspension bridge across the Forth were abandoned. More generally, the Tay Bridge disaster inspired a governmental overreaction on the wind pressure requirements for new bridges, which led to a generation of constructions which were technically over-designed and inefficient.

Arguably the Forth Bridge was one of them – it’s undoubtedly the stiffest, strongest and safest railway bridge ever constructed. This was proven beyond doubt on the extremely grey, windy day the Prince of Wales, later King Edward VII, officially opened the new link across the Firth of Forth.

The Royal carriage, stopped on the bridge so the Prince might operate the valve on the machinery that would deliver the final rivet, rocked and swayed in the wind, “but the Bridge was as the solid earth,” according to a contemporary newspaper report. “No better experience could have been desired by way of giving confidence in the structure.”

Hopefully a certain Monsieur Gustave Eiffel, who was among the invited guests to the opening, was impressed. Despite being quite avant-garde and daring, he had opted to build his now equally iconic tower (originally the entrance arch to the 1889 World’s Fair in Paris) out of tried-and-tested wrought iron; in contrast, the Forth Bridge – 2.5km (1.5 miles) long, and taller than St Paul’s Cathedral – was the first structure of such as scale to be built entirely out of steel.

It was not without cost, however; quite apart from the £3.2 million price tag paid by a consortium of railway companies, more than 70 men out of a workforce of 5,000 died during its construction. Their contribution is now commemorated by two monuments at sites in both North and South Queensferry.

At the time, the Forth Bridge’s benefits were described as “not of today alone, or of tomorrrow; they are for all time.” Though designated a Category A listed structure in 1973, the Forth Bridge continues to serve its original purpose, with more than 200 trains crossing it daily, transporting six million passengers a year as well as large amounts of freight traffic.

When, in 1964, the Forth Road Bridge was officially opened by HM The Queen, 120 fireworks were fired from the Forth Bridge to salute what the then-British Rail called the “slender concrete daughter” of the “Steel Lady of the Forth”. Soon another “daughter” – the Queensferry Crossing – will join her on the Forth, but is surely equally unlikely to detract from such an iconic marvel of engineering.