Artist known for his images of William Wallace 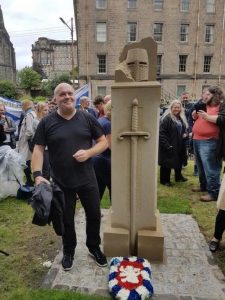 As an architectural technician, Mr Hillhouse worked for a variety of private practices, local authorities and government bodies before joining the School of Landscape Architecture, ESALA, at Edinburgh College of Art, part of the University of Edinburgh. But it is for his images of Scotland and its heroes rather than his highly detailed architectural drawings, perspectives and presentation work that he will be fondly remembered.

Fascinated since childhood by epic tales of Scottish heroes, Mr Hillhouse was surprised and pleased when his paintings began to be sought by charitable trusts, book publishers and television documentary-makers. In particular his images of Wallace have appeared on the covers of numerous books, magazines, CD and DVD covers; his Execution of Wallace featured in a documentary included on an American blu-ray release of Mel Gibson’s iconic film Braveheart.

Three of his reconstructions of the Wallace period are on permanent display at the Stirling Smith Art Gallery and Museum, while a further two works were included in their Bannockburn 2014 exhibition. As recognition of the Cockenzie-based artist’s work spread, it led not just to further book illustration work, covering a wide range of historical periods, but also the unusual accolade of briefly becoming the official artist to the New Zealand All Black rugby legend Jonah Lomu.

An important figure in Mr Hillhouse’s own artistic career was the Scottish author and historian David Ross, who encouraged him in his artistic work at a time when, as Mr Hillhouse admitted later, he “had lost all confidence in it”. David Ross used many of Mr Hillhouse’s paintings as cover and internal illustrations for his books on Scottish history. The resulting boost to Mr Hillhouse’s confidence led to him giving public talks on his research and art production, especially in connection with the Scottish Wars of Independence.

In 2005 he was among the many invited by then-First Minister of Scotland Jack McConnell MSP to Stirling Castle to join the official commemoration marking the 700th anniversary of Wallace’s execution. As an active member of the Society of William Wallace, Mr Hillhouse contributed much to its activities, not least as their official artist in residence; this included the designs for both the Bell O’ The Brae memorial, unveiled in the Glasgow Necropolis in 2016, and a memorial plaque erected in London.

Mr Hillhouse was also commissioned by the Battle of Prestonpans 1745 Heritage Trust to paint three large paintings of the battle, which now hang in the Prestoungrange Gothenburg pub. He saw this as both a way to give something back to “The Pans”, the town in which he had grown up, and to help raise local awareness of some of the less familiar aspects of the battle, which was the first major military encounter of the 1745 Jacobite uprising.

Modestly, and against all evidence to the contrary, Mr Hillhouse insisted that he wasn’t “a real artist”. On his own website, set up to sell prints of his work, he insisted: “I’m still just a guy who likes to doodle in his spare time. I have a full-time job that pays the bills and I’m happy to get the odd commission but I’m not sure I could ever make a living from it. And I think that’s probably the way I like it.”

Mr Hillhouse believed that this arrangement gave him the freedom to only paint what he wanted, rather than what he had to. “I’m just thankful that some people seem to like some of my work,” he wrote.

It was clear, though, that Mr Hillhouse was as much loved as a person as an artist. Society of William Wallace convenor Gary Stewart wrote: “Andy’s work is such an inspiration, but it wasn’t just that; he was one of the nicest guys I have ever met, who did so much work behind the scenes for the society, especially the Bell O’ The Brae with the official design for which there was no charge. Also, the coins he designed, with any profit not going to himself but the Bell O’ The Brae fund.”

In a statement, the Battle of Prestonpans Heritage Trust added: “Andy’s love of history shines through so many of his great works. We shall miss Andrew greatly for his companionship but not least for his ability to tell our story with his brushes.”

At the time of his death, Mr Hillhouse was working on a graphic fantasy novel with the historian and broadcaster Tony Pollard; the novel would have featured Nazi werewolves.

Mr Hillhouse is survived by his wife Vicky, and their son Gus.