By paulfcockburn on 31 March, 2018 in Popular Science

I am pleased to have been asked, by BBC Sky at Night Magazine, to provide some coverage of the space and astronomy-related events during this year's 30th Edinburgh International Science Festival.

This is in the form of three blog-posts, delivered and published weekly, which can be accessed here:

It’s fitting that, on the 40th anniversary of Douglas Adams’ The HitchHiker’s Guide to the Galaxy, the theme of the 2018 Edinburgh International Science Festival (31 March to 15 April) is “Life, the Universe and Everything”.

It’s also a significant year for festival itself; its 30th “edition”. Yes, Edinburgh in August may be home to the largest Arts Festivals in the world, but the Scottish capital also pioneered the idea of a science festival back in 1989. 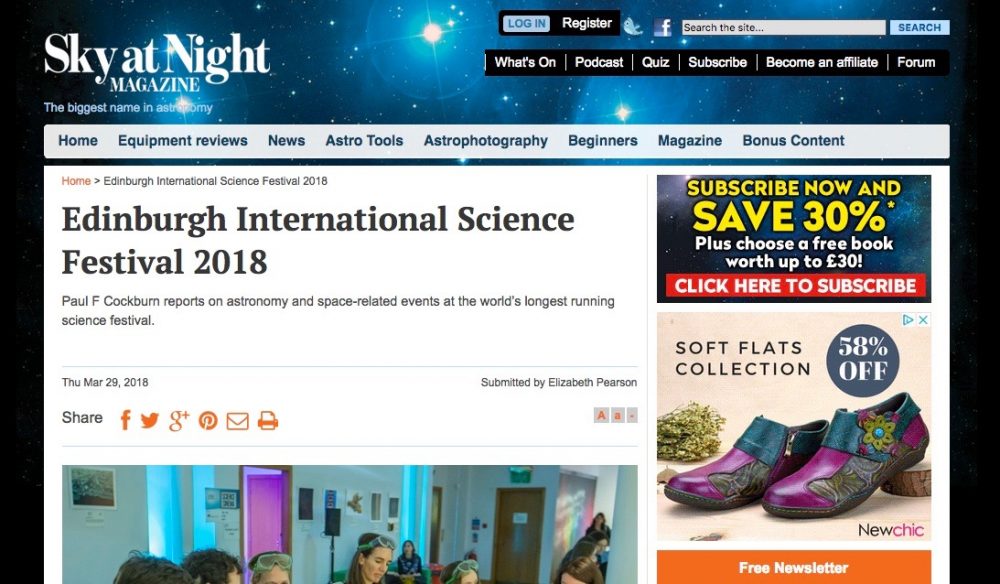 2: Big and Small in Space at Ed Sci Festival

Space is no longer the sole preserve of NASA or the European Space Agency; it’s also an environment for successful businesses numbering their staff in two or three figures, rather than four or five.

Scotland is increasingly recognised for its growing range of small companies involved in the construction and launch of CubeSats – satellites made up of multiples of 10cm cubed units.

These were some of the messages taken away from Spaceflight on a Shoestring (2 April), in which...

Are we alone in the universe?

In The Search for Life in the Universe (9 April), astrobiologist Prof Charles Cockell took his audience on an engaging tour of “recent discoveries that put us on the brink of being able to answer this question for the first time”.

These ranged from planned missions to Mars to potential dives into the sub-surface oceans of Enceladus and Europa; and astrobiology’s own “holy grail”, the discovery of a “second Earth” exoplanet within its star’s “habitable zone”.