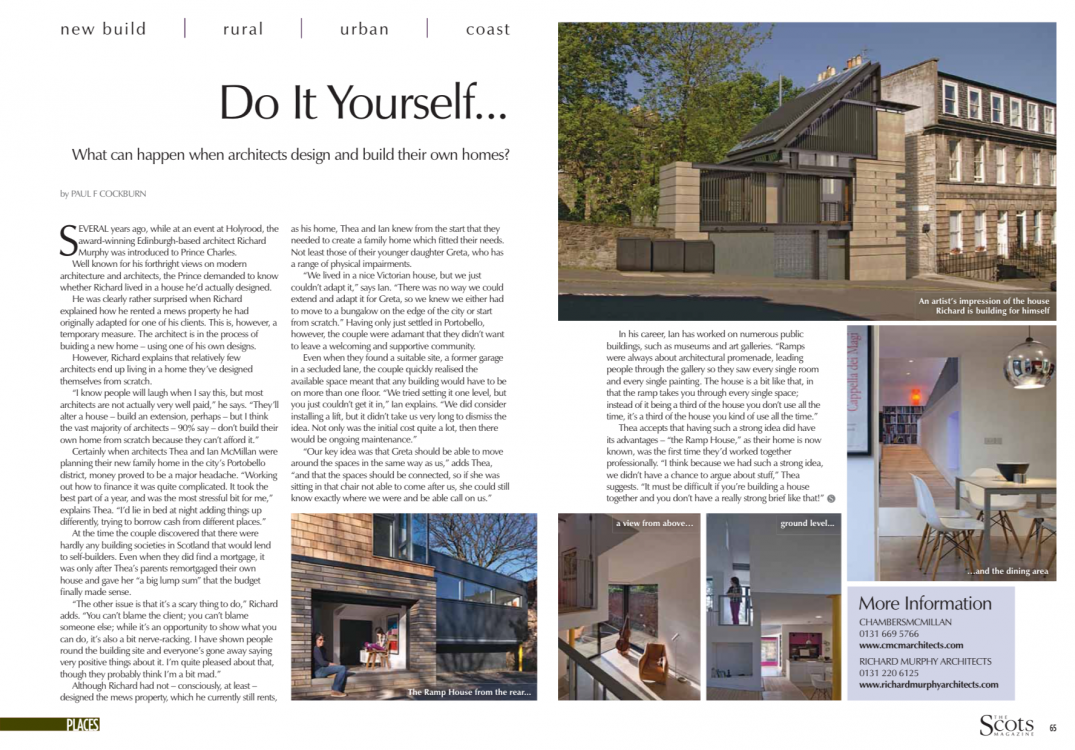 Several years ago, while attending an event at Holyrood, the award-winning Edinburgh-based architect Richard Murphy was introduced to Prince Charles.

Well known for his forthright views on modern architecture and architects, the Prince demanded to know whether Richard lived in a house he’d actually designed — and was clearly rather surprised when Richard explained how he rented a mews property he had originally adapted for one of his clients.

Richard accepts, though, that relatively few architects do live in a home they’ve designed, especially from scratch. “I know people will laugh when I say this, but most architects are not actually very well paid,” he says. “They’ll alter a house — build an extension, perhaps — but I think the vast majority of architects — 90% say — don’t build their own home from scratch because they can’t afford it.”

Certainly when architects Thea and Ian McMillan were planning their new family home in the city’s Portobello district, money proved to be a major headache. “Working out how to finance it was quite complicated; that took the best part of a year, and was the most stressful bit for me, trying to work out how we were going to do it,” explains Thea. “I knew we had to, that we had the planning permission and it was the right thing to do, but I’d lie in bed at night adding things up differently, trying to borrow cash from different places.”

At the time the couple discovered that there were hardly any building societies in Scotland that would lend to self-builders; even when they did find a mortgage, it was only after Thea’s parents remortgaged their own house and gave her “a big lump sum” that the budget finally made sense.

“The other issue is that it’s a scary thing to do,” Richard adds. “You can’t blame the client; you can’t blame someone else; while it’s an opportunity to show what you can do, it’s also a bit nerve-wracking. I have shown people round the building site and everyone’s gone away saying very positive things about it. I’m quite pleased about that, though they probably think I’m a bit mad at the same time!”

Although Richard had not — consciously, at least — designed the mews property, which he currently still rents, as his home, Thea and Ian knew from the start that they needed to create a family home which “fitted” their needs — not least those of their younger daughter Greta, who has a range of physical impairments.

“We lived in a nice Victorian House, but we just couldn’t adapt it,” says Ian. “There was no way we could extend and adapt it for Greta, so we knew we either had to move to a bungalow on the edge of the city or start from scratch.” Having only just settled in Portobello, however, the couple were adamant that they didn’t want to leave a local community which they’d found welcoming and supportive.

Even when they found a suitable site, a former garage in a secluded lane, the couple quickly realised that the available space meant that any building would have to be on more than one floor. “We tried setting it one level, but you just couldn’t get it in,” Ian explains. “We did consider installing a lift, but it didn’t take us very long to dismiss the idea; not only was the initial cost quite a lot — and then there would be ongoing maintenance, and the risk of it breaking down — it created an inequality in the family that we use the stairs.”

“Our key idea was that Greta should be able to move around the spaces in the same way as us,” adds Thea, “and that the spaces should be connected, so if she was sitting in that chair not able to come after us, she could still know exactly where we were and be able call on us.”

Thea accepts that having such a strong idea did have its advantages: “the Ramp House,” as their home is now known, was the first time they’d worked together professionally. “I think because we had such a strong, driving idea, we didn’t have a chance to argue about stuff,” Thea suggests. “It must be really difficult if you’re building a house together and you don’t have a really strong brief like that!”