By paulfcockburn on 24 October, 2014 in Popular Science 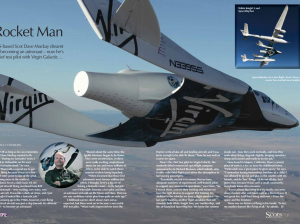 For as long as he can remember, Dave McKay always wanted to fly. “During my formative years, I lived in Helmsdale on the east coast of Sutherland,” he says. “That really inspired me to get into flying because it was on a low level entry point to one of the great training areas in the North of Scotland, so on a daily basis I’d see fast jet aircraft flying overhead from RAF Lossiemouth — very exciting, very noisy, very fast aircraft. It was like a daily air show. And I just thought that it looked like a fantastic job.”

Growing up in the 1960s, however, even flying low-level aircraft was just a step towards his ultimate goal — to become an astronaut! “Round about the same time the Apollo Missions began to be flown, Dave explains. “They were on television, so these were really exciting and inspirational times for me and many millions of others around the world, to be able to watch those massive rockets being launched. When I learned that those first astronauts were former military test pilots, I thought here was a means of having a fantastic career — to fly fast jets over Helmsdale and then become a test pilot and then become an astronaut and walk on the Moon and Mars. That was my very ambitious career plan from quite an early age!”

Childhood careers don’t always turn out as expected, but Dave not only went on to became a successful RAF test pilot — “What really impressed me were the Harrier vertical take-off and landing aircraft, and I was lucky enough to be able fly those.” — but is well on course to at least getting into space! Dave’s the chief test pilot for Virgin Galactic, the modestly-titled commercial spaceflight company sponsored by Sir Richard Branson, which initially aims to offer suborbital flights just above the atmosphere to fare-paying passengers.

“Essentially, my job is to ensure that we have adequate numbers of experienced and well-trained pilots to support our commercial operations,” says Dave. “So I recruit them, oversee their training and ensure we have the right devices to support that training. So in addition to the vehicles themselves we have a flight simulator — in fact we’re building another flight simulator that will simulate both White Knight Two our ‘mothership’ and the air-launched SpaceShipTwo. We keep ourselves current, so that we know the systems inside out —  how they work normally, and how they work when things degrade slightly, keeping ourselves sharp and current and ready to do the job.”

Now based in Mojave, California, Dave’s current place of work is a far cry from his childhood. “Helmsdale was a great place to grow up in,” he insists. “I do remember having tremendous freedom as a child; I was allowed to go out and play in the country with my friends, and do boy things. I’d be out all day, but I guess that, because it was such a small community, everybody knew who you were. It was almost like being in a big family, you were always looked after and taken care in a discreet way. It was great fun; I still love being outdoors, I love the space and the freedom.”

Yet, apart from being inspired by the daily air show courtesy of the RAF, there was no history of flying in his family. “In fact my mother does not like flying at all,” he admits. “She flew once in her life — when, I think, she was 82 years old — didn’t enjoy it, and so has never done it again.”

The first time he flew, albeit briefly, was when he was about nine or ten years old. “It was around about 1966, at the Dornoch Agricultural Show where my father paid for myself and himself to go up in an LoganAir Islander for what was, effectively, a 15 minute joyride around about Dornoch and Golspie,” he explains. “I do remember it being extremely noisy when it started up and, flying up a grass strip at Dornoch, quite bumpy. Then there was that amazing feeling when we finally lifted off the ground; all the bumps went away and it was incredibly smooth. I thought that was quite magical, so I came down super-excited and more driven than ever to become a pilot.”

Having always had an interest in “how things work, and how airplanes fly,” Dave opted to study Aeronautical Engineering at University in Glasgow before joining the RAF, which he did in 1979. By that time he’d already learned to fly, courtesy of the University Air Squadron. “I actually got quite a lot of flying with them before I joined the RAF, and that was a great help,” he insists, “but the training process takes a very long time, particularly for single-seat fast jet aircraft. It was probably about four years after joining before I was what they call ‘combat ready’.”

Flying Harriers in Germany was “great fun”, he insists. “We did some really exciting stuff there, deploying the Harrier force into the field — literally, sometimes, flying off from grass strips! Other times we’d commandeer just a general road in the country and fly off from there. But being a test pilot really seemed to be a really interesting, quite challenging job. You get to fly lots of different aircraft, including some quite new ones, and to learn a lot more about how they work. So as soon as I had the minimum experience I applied for test pilot school and was lucky enough to get in.”

His first year in ‘test pilot school’ was, unusually, in the South of France, essentially as an “exchange student” at the École du personnel navigate d’essais et de réception (EPNER). “I wasn’t really gifted or that interested in languages, but I’d got a Higher grade in French thanks to a very strict teacher at High School who had made me work very hard. So I had my ‘Year in Provence’ before coming back to the UK, where I spent the rest of my time at MoD Boscombe Down, an aircraft testing in Wiltshire.”

Dave spent the remainder of his 16 year RAF career flying, but towards the end pressure mounted for him to move higher up the RAF hierarchy. “I was told that I was basically coming to the end of my flying career, that I’d have to hang up my flying boots and become essentially a manager,” he says. “That’s the normal career progression, but I wasn’t ready for that. So, as much as I had a great time in the RAF, I elected to leave and was lucky enough to get a job with Virgin Atlantic.”

Officially, Dave would be a Virgin Atlantic employee for a further 16 years, working as a captain on the company’s 747s and later Airbus A340 aircraft. However, in 2003 his career took an unexpected detour. “Virgin Atlantic sent out a memo saying they had a tie-up with Steve Fosset and his attempt to fly solo non-stop around the world in an aircraft called the Virgin Atlantic GlobalFlyer — it was sponsored by Virgin Atlantic, and was in Atlantic colours. I met some of the team involved in that project and was asked to have a look at some technical documentation, using my expertise — if you can call it that — as a test pilot.”

On the basis of what he reported, Dave was invited by Mojave-based manufacturer Scaled Composites to have a look at the GlobalFlyer, and to speak with their engineers and the pilots. Soon afterwards, the same company were building SpaceShipOne, the “proof of concept” vehicle which inspired the creation of Virgin Galactic. “As I was out there, I was invited to fly the SpaceShipOne simulator,” Dave explains. “I did that a few times, spoke with the test pilots and engineers and founder Burt Rutan himself about SpaceShipOne. We talked about what it might lead to, what potential improvements they might make, and so forth. So when Virgin Galactic got going and they decided they needed a test pilot, this would be in 2005, I was asked if I’d like to join Virgin Galactic.

“I was lucky enough to be in the right place at the right time,” Dave insists. “I’d always kept a great interest in manned spaceflight. I became a pilot, then a test pilot, but unfortunately the UK didn’t have an astronaut programme, so I’d kind of given up on my childhood ambition — and then a few years later this opportunity came along! I had to pinch myself.”

There’s one final detail that would doubtless have thrilled his younger self. “I used to watch the original Star Trek all the time as a kid,” he admits. “I was fascinated by the voyages of the Starship Enterprise.” While the first Virgin Galactic ‘mothership’ has been renamed Eve, after Richard Branson’s mother, you can tell Dave’s slightly pleased that the first actual vessel to fly into orbit itself is called VSS Enterprise!