By paulfcockburn on 23 December, 2016 in Popular Science

In January 1992 the first confirmed discovery of an exoplanet was made. Paul F Cockburn looks at how the search for alien worlds has progressed in a quarter of a century. 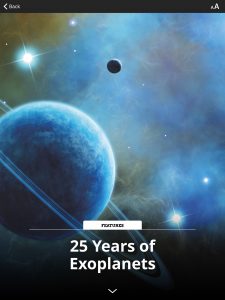 The idea of alien worlds circling distant stars is hardly new; as far back as 1584, Italian philosopher Giordano Bruno suggested space was filled by “an infinity of worlds of the same kind as our own.” During the past century numerous authors, TV directors and film producers have set their stories on planets well beyond our own solar system.

Then, in the summer of 1981, it seemed that alien worlds were about to switch from science fiction to science fact. Not only that, a planet had apparently been amazingly detected orbiting the aftermath of an exploding star. These incredibly dense remnants are generally referred to as pulsars because, thanks to their spin, the beams of light they still emit sweep across the Earth at regular intervals. From our perspective, pulsars appear to flicker like a lighthouse beam—the rate at which the pulses arrive implying the rate of the pulsar’s spin.

Marek Kukula, now the Public Astronomer at the Royal Observatory Greenwich, was studying his PhD at Jodrell Bank at the time and well remembers the excitement. “We knew that something strange was going on, because everyone was getting a bit cagey. Then we were told that they’d found a signal in the data which could only really be interpreted as an Earth-sized planet orbiting the pulsar.”

Unfortunately, the team at Jodrell Bank soon discovered a systematic error in the software used to analyse the pulsar data; once this was corrected, the detectable “drag” on the pulsar’s spin, thought to have been caused by the mass of an unseen planet, vanished.

However, immediately after Jodrell Bank’s Andrew Lyme had officially retracted his team’s findings at the January 1992 meeting of the American Astronomical Society, held in Atlanta, he was followed on stage by Aleksander Wolszaczan, principal author of a paper about to be published in Nature that detailed his own detection of at least two planets around another pulsar.

Alex, based at the National Astronomy and Ionosphere Center at the Arecibo Observatory in Puerto Rico, was particularly interested in ‘millisecond pulsars’—which spin hundreds of times a second. However, he had found it difficult to devise a sufficiently accurate mathematical model to explain how one particular millisecond pulsar—designated PSR 1257 + 12—was behaving.

“Every time I came up with a model, and then took some more data, the model failed to predict the pulse arrival times,” he admits. Following a concentrated observation period of almost a month, Alex began to see a regular glitch in the rate that the pulses reached Earth. Most pulsars have companion dwarf stars providing material and energy, but Alex realised that the observed peculiarities in these pulses were best explained by the existence of “two planetary mass objects.” Unlike the Jodrell Bank team, Alex knew that his result wasn’t simply down to “something in the data analysis software”; he had observed another binary pulsar which had not shown the same irregularities. Alex’s findings were independently confirmed several months later.

It would be the best part of three years before, in 1995, an exoplanet was detected around the Sun-like star 51 Pegasi. This ‘hot Jupiter’—a massive gas giant in close orbit around its parent star—also came as a complete surprise.

“What I think is really cool about those discoveries is that by finding these really weird types of planets and solar systems, we’ve actually learnt new things about our own,” says Marek Kukula. “We know these ‘hot Jupiters’ can’t have formed so close to their stars, so they must have formed further out and moved in. Suddenly you have this idea that planets can move from their original formation sites. If you look at our own solar system, you can start to see all these subtle signs that actually, in the early days of the solar system, there was quite a lot of movement: Jupiter and Saturn moving in, Neptune and Uranus perhaps being pushed out and even swapping places.”

It’s even proposed that this gas giant ballet was likely responsible for the Late Heavy Bombardment, a period (about half a million years after the formation of the solar system) during which huge amounts of material were fired towards the inner planets. “So you can argue that, by finding and studying these hot Jupiters around other stars, we’ve solved a mystery in our own solar system which is actually quite important to understanding how the Earth is the way it is.”

Thanks to observation platforms such as the Kepler Space Telescope, and the continued refining of observational techniques, astronomers have detected—according to NASA, at the time of writing—more than 3,400 exoplanets. If nothing else, the sheer scale of this ever-growing list means astronomers can now replace some of the terms in the Drake Equation, which famously attempts to calculate the number of active, communicative extraterrestrial civilisations in the universe. “Suddenly, over the last 25 years, we’ve been able to replace quite a few of those terms with numbers that are actually pretty good estimates,” says Marek. “We’re homing in on getting a more accurate answer, which is tremendously exciting.

“If you think that an Earth-like planet in an Earth-like orbit is the most likely place to find complex extraterrestrial life, then suddenly we can be quite confident that those kinds of environment do actually exist in quite large numbers throughout the galaxy. But is that enough for life to exist? Within the next couple of decades, that’s a question we’ll probably be able to start to answer.”

So what of the future? Dr Beth Biller, of the Institute for Astronomy at the University of Edinburgh, was still in High School when the first exoplanet detections were announced, and her entire astronomy career has been focused on exoplanet detection and investigation. “Each observational technique is sensitive to certain ranges of planets,” she says. “Of the major techniques, transit and radial velocity are more sensitive to Jupiter-sized objects closer to the star while direct imaging is more sensitive to objects further out—eventually they’ll meet.”

“It does seem like there’s a new discovery every other week,” admits Marek. “That’s because there are, which is an amazing situation to be in. Even the fact that we’re so blasé about it just kind of shows what astonishing advances have been made in the field.”

WHAT’S IN A NAME?
The scientific names of exoplanets usually consist of two elements: a proper noun or abbreviation, sometimes with associated numbers, followed by a lowercase letter. The first element is the most common or astronomical catalogue name of the host star; the second a lower case letter (not including “a”) designating the planet’s order from the star. So, for example, the innermost planet around the pulsar Alex Wolszaczan studied is officially designated PSR1257 + 12 b.

EXOPLANET MENAGERIE
The Closest: Proxima b
In August 2016 astronomers announced that our nearest stellar neighbour Proxima Centauri (a red dwarf just 4.25 light years distant) is circled every 11 days by a possibly rocky world, slightly bigger than Earth, that’s capable of having liquid water.

Most distant: SWEEPS-11
Detected along with SWEEPS-4 in 2006 during the Sagittarius Window Eclipsing Extrasolar Planet Search (SWEEPS) programme using the Hubble Space Telescope, this giant gas planet (with a radius 1.13 times that of Jupiter) is some 27,710 light years away.

The Smallest: Kepler-37-b (Or is it?)
PSR B1257+12b (aka Draugr) in the constellation of Virgo is theoretically the least massive exoplanet yet discovered, but the masses of Kepler-37-b (with a radius smaller than Mercury) or the planets circling Gliese-581 could trump it.

The Weirdest: Take your pick!
Carbon-rich 55 Cancri-e could be the galaxy’s biggest diamond; TrES-2b, which reflects only about 1% of its sun’s light, is the darkest world so far discovered; WASP-12b could see ruby rain in its upper atmosphere.

DETECTION METHODS
“We had all, for decades, been taught that finding planets around other stars would be really, really difficult,” says Marek Kukula, Public Astronomer at the Royal Observatory Greenwich. “The expectation was that we would not have the technology to do this for many decades.”

However, the two most successful detection methods since 1992 have focused on finding indirect evidence: the measurable “wobble” in a star caused by the influence of an orbiting planet (radial velocity), or the distinctive dip in luminosity as the planet transits across the star (transit photometry). Or, ideally, both. “You can estimate a planet’s mass, its orbital distance, and therefore its temperature, its density and composition—just from the information you can get from a shadow and a wobble, without every actually seeing the planet itself.” Marek adds.

“In terms of pushing to lower mass planets in the habitable zones around sun-like stars, the technique that’s going to do that in the future is probably direct imaging,” says Dr Beth Biller at the Institute for Astronomy at the University of Edinburgh. “It’s been very successful with young giant planets; and people are working really hard on the technology to push to the Earth-like planets.”

Double Trouble
Holidays with the Stars