Two Sides of the Same Coin

By paulfcockburn on 22 July, 2016 in Popular Science 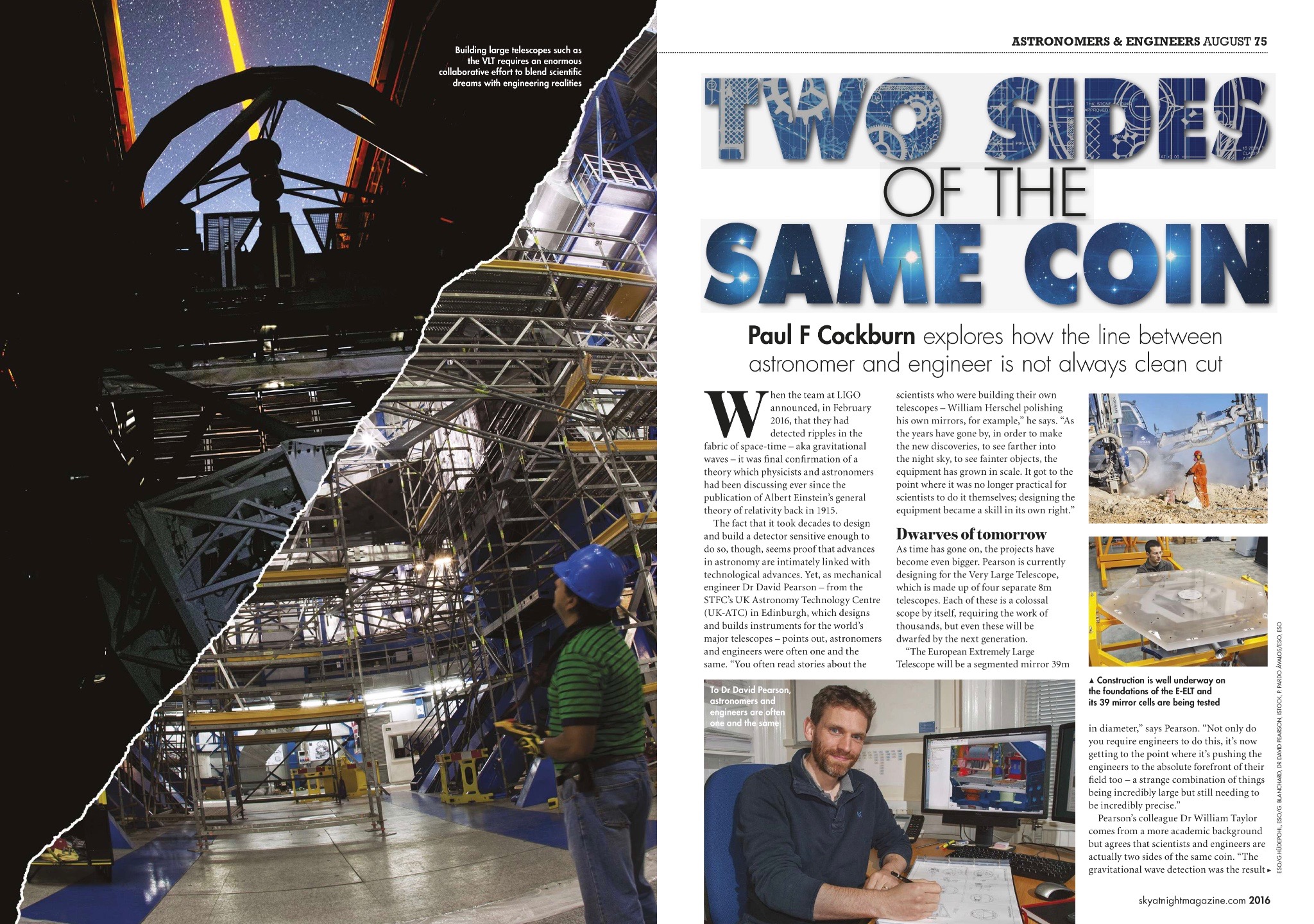 When the team at the Laser Interferometer Gravitational-Wave Observatory (LIGO) announced, in February 2016, that they had detected ripples in the fabric of spacetime – aka gravitational waves – it was final confirmation of a theory which physicists and astronomers had been discussing ever since the publication of Albert Einstein’s General Theory of Relativity back in 1915.

The fact that it took decades to design and build a detector sensitive enough to do so, though, seems proof that advances in astronomy are intimately linked with technological advances. Yet, as Dr David Pearson – a Mechanical Engineer at the UK Astronomy Technology Centre (UK-ATC) in Edinburgh – points out, astronomers and engineers were often one and the same. “You often read stories about the scientists who were building their own telescopes – William Herschel polishing his own mirrors, for example,” he says. “As the years have gone by, in order to make the new discoveries – to see further into the night sky, to see fainter objects – the equipment has grown in scale. It got to the point where it was no longer practicable for scientists to do it themselves; designing the equipment became a skill in its own right.

“We’re currently designing and building instrumentation for a set of four eight-metre telescopes, the Very Large Telescope (VLT) on the Chilean plateau,” he adds. “The next generation telescope, which is already in progress, will be a segmented mirror 39 metres (127 feet) in diameter. Not only do you require engineers to do this, it’s now getting to the point where it’s pushing the engineers to the absolute forefront of their field too – a strange combination of things being incredibly large but still needing to be incredibly precise.”

Pearson’s colleague Dr William Taylor comes from a more academic background but agrees that scientists and engineers are actually two sides of the same coin. “The gravitational wave detection was the result of decades of engineering,” he points out. “When you’re building the most sensitive detector that humanity has ever seen, the line where engineering stops and science begins gets blurred. All that separates the scientist who does engineering and the engineer who does science is whether you have a preference for theoretical postulation or whether you enjoy the practical side.”

Astronomers are, for the most part, still wedded to the idea of getting experimental verification of their theories, but with the “low hanging fruit” discoveries already made, this isn’t getting any easier. “Finding the point at which the scientists are able to achieve something genuinely unique and worthwhile, and where the engineers think it’s feasible within the boring constraints of money and time, is not an easy thing to pin down,” says Pearson, though he admits to enjoying the process.

“The way it usually works is that you start off by looking at what you would like to achieve, and then try to calculate what seems possible,” explains Edinburgh-born Alastair Heptonstall, an associate scientist at the California Institute of Technology (Caltech) whose main role was developing the extremely fine silica fibres which held the detector’s mirrors in position.

“Then you go back to see how that effects your overall system. For example, with the silica fibres, you might have some constraint on how accurately you can produce the diameter that you want. So, you might start of with what you would like to have, but then very quickly you soon have to figure out what is achievable, whether that’s acceptable. If it’s not acceptable, that’s kind of the point at which  you really have to start attacking the problem and see what you can achieve.”

The result of this negotiation is “the Spec”; the document which outlines the specifications of what the astronomer hopes to achieve and what the engineer’s work will be measured against. “All the haggling happens at the time when the specification is drafted,” insists Pearson. “People won’t sign off on it if they don’t think it can be done, from both sides.”

The sheer scale of cutting-edge astronomy – and the fact that few countries can now afford them on their own – means that astronomers don’t just need the help of mechanical, electrical and software engineers – they require systems engineers to manage the projects as well. “The idea that you need engineers has around for a while,” says Taylor, “but the additional thing is that you need to have a management structure. Things can be so complicated now. Actually, that’s one of the things which we do quite well here; UK-ATC is particularly good at its project management.”

Especially when it comes to putting any equipment into space, engineering know-how is a must. “Space brings a very difficult set of requirements for engineers because there’s no atmosphere,” says Pearson. “The temperatures can fluctuate a lot, from very hot to very cold – depending on how much the sun is heating your instrument. It can also be subject to quite large amounts of radiation, depending on where you are, and that can effect optical surfaces. There are severe weight constraints and limitations because it’s very expensive to launch anything heavy off the surface of the Earth. At the same time, it also has to be strong enough to withstand the launch, which can introduce a very large amount of vibration into the system. It’s a real conflicting set of requirements there.”

After its launch in 2018, the James Webb Space Telescope is expected to provide astronomers and cosmologists with incredibly new insights thanks to its unprecedented resolution and sensitivity from long-wavelength (orange-red) visible light, through near-infrared to mid-infrared. But, given it will be located some 1,500,000 kilometers (930,000 miles) from Earth, it has to be reliable.”

“The fact that they managed to fix Hubble was remarkable,” say Taylor, “but they won’t have any opportunity to do that with the James Webb Space Telescope. Part of the reason why JWST is taking so long and costing so much is that the engineers are testing it for so long.”

February’s detection of gravitational waves is the climax of decades’  work; it’s also a new beginning. “There’s already a lot of research on how we can do future upgrades to LIGO that would further improve the performance,” says Heptonstall.

It seems engineers are definitely up for any new challenges astronomers bring them!

• MIRI (Mid InfraRed Instrument):
The “beauty” of this infrared spectrometer for the James Webb Space Telescope is that it “allows us to see right back to early galaxies,” using wavelengths blocked by Earth’s atmosphere. The challenge for engineers is ensuring that it essentially foolproof – as, unlike Hubble, there won’t be any opportunity for repair.

• SQUARE KILOMETRE ARRAY (SKA):
UK-ATC plays a key role in systems engineering and software design for what will be the world’s largest – and most sensitive – radio telescope by linking thousands of receptors located in Australia and Southern Africa. SKA will enable scientists to explore the universe over a wide range of radio frequencies.

• EUROPEAN EXTREMELY LARGE TELESCOPE (E-ELT):
Located in northern Chile, this next generation large telescope – consisting of an array of almost 1,000 mirrors forming a 39m (128 feet) mirror – is again being project managed by UK-ATC in Edinburgh. The team will also start work on the Harmony spectrograph for the E-ELT in around 2024.

• VISTA:
A relatively rare instance of UK-ATC staff designing and building a telescope, with parent agency STFC responsible for overall project management. The 4 metre mirror – installed at the European Southern Observatory’s Cerro Paranal Observatory in Chile – has been providing “fantastic” data in infrared and visible light since December 2009.

• JAMES SHORT (1710-1768)
It was Colin Maclaurin, professor of mathematics at the University of Edinburgh, who encouraged Short’s interest in practical optics and allowed him to use rooms in the college buildings for experiments in telescope construction. Short used only metal specula and his skill – largely self-taught – lay in the extremely complicated polishing process of these mirrors.

Short produced more than 1,300 telescopes – mostly of Gregorian design – which he sold to observatories (including Paris and St Petersburg) and individuals across Europe. Two of his telescopes accompanied Captain James Cook on his voyages to observe the Transits of Venus in 1761 and 1769.

• WILLIAM HERSCHEL (1738-1822)
“I have looked further into space than any human being did before me,”
Herschel once explained. That he was able to do so – from the back garden of a nondescript townhouse in Georgian Bath – was thanks to the eventual quality of the telescopes he designed and built himself – with the help of brother Alexander. According to his sister Caroline, who assisted with his observations, “almost every room in the house (was) turned into a workshop”, with Herchel “grinding glasses and turning eye pieces” to build his equipment, including the seven-foot reflecting telescope with which he discovered the planet Uranus.

• WILLIAM LASSELL (1799-1881)
Bolton born Lassell lived most of his life in Liverpool, where he established the brewery that paid for his own observatory. Best remembered for discovering Neptune’s largest moon Triton, just 17 days after Johann Gottfried Galle discovered Neptune itself, Lassell built three telescopes over his career – one 24 inch (0.61m) and two 48 inch (1.21m) mirrors. “Lassell linked up with local engineers in the city,” says Gerard Gilligan of the Society for the History of Astronomy. “He used steam-driven polishing machines to produce large astronomical mirrors. Not only was Lassell an accomplished astronomical observer, he became experience in engineering.”