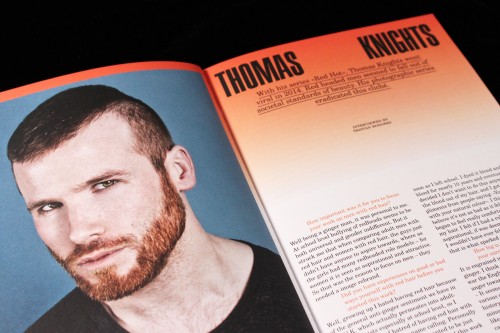 Part of me can’t help but wonder why a magazine like MC1R hasn’t already appeared before – especially in Scotland. Then again, given this particular publication’s style and format, perhaps it isn’t that surprising.

To explain: MC1R is a magazine aimed at, and about, people affected by a melanocortin-stimulating hormone receptor (usually abbreviated to MC1R) – a gene mutation which causes red hair. It’s edited by a guy called Tristan Rodgers, who’s based in Hamburg. Rather than Hamilton, Scotland – a country which, for understandable reasons, has often been considered home to the highest concentration of redheads in the world, even if the actual statistical evidence supporting that assumption is severely lacking.

At this point I should point out that, although I’m Scottish, I’m not ginger. I’m not a redhead. My dad was, though; for many years, if I let my beard grow, parts would show a decidedly ginger hue, before age ensured my follicles opted instead for a mixture of grey and white. So, I have a personal interest in this publication that goes beyond just a general geekery about magazines.

Not that I would dare claim to be, or understand what life can be like for, a “person of primary hair colour”, as Canadian comedian Shawn Hitchins put it while performing on the Edinburgh Festival Fringe in 2013. Seemingly on the spur of the moment, he rather unexpectedly organised the UK’s first Ginger Pride march in the Scottish capital. However, if that set any kind of record – with around 200 “marchers” – it was definitely demolished the following month when 1,600 ginger-haired people attended the Redhead Day Festival in the Dutch town of Breda.

It’s often said that between 1% and 2% of humanity – or 70 to 140 million people – are ginger haired. Statistically, the US is most likely to be home to the largest number of redheads in the world, although that’s as much because of its overall population as its history of immigration. (If just 1% of Americans have red hair, for example, that translates into there being three million of them – equal to three fifths of Scotland’s population.) In comparison, even if you assume one in 10 Scots is ginger-haired, then that’s just half a million, or less than 1% of the estimated global total…

One reviewer has suggested that MC1R “celebrates red hair and fair skin with all the devotion of a pre-Raphaelite painting”, though I’m not entirely sure whether the creatives behind it haven’t taken the idea of a “ginger magazine” a tad too literally. For instance, in terms of the colour schemes used throughout the publication: there’s not much blue or green to be seen here.

Whether it’s the rosy pink background for a fashion spread or the simple border around the editorial letter, the publication’s colour palate seems intent on referencing sunburnt white skin as often as possible. When it comes to the interviews – in the latest issue, they’re with model Hattie Watson and photographer Thomas Knights, the latter well known for his images of handsome redheaded men – the magazine’s questions are always tinted orange – presumably to emphasise the publication’s “ginger perspective”. OK, I accept that this particular colour palate isn’t commonly used in the magazine, giving the title as rare an appearance as its proposed readers, but it does strike me as being just being too in-your-face.

Is there really such a need for a magazine like MC1R? “Red-heads are one of the smallest minorities in society, and they often grow up without the kind of self-understanding that would protect them from discrimination, stereotyping and bullying,” Tristan told Madeleine Morley for the MagCulture blog. “When I was a child, I had no support or anyone to look up to or learn from. With this project, I hope to give younger red-head the experience that I missed.”

There are, of course, numerous magazines around the world targeting readers from different racial and cultural traditions. I don’t have any problem with a publication aiming to “reach out” to redheads in the same way that there are numerous magazines targeting people on the grounds of race, sexual orientation or an interest in antique tractors. I’m just not sure that this necessarily somewhat expensive “glossy” will have sufficient mainstream appeal among redheads who are (a) not particularly interested in fashion, or (b) “identify” as “being ginger”.

Whether or not MC1R proves to be a genuine trailblazer, we’ll just have to wait and see. But all the best to Tristan, anyway. At least he’s trying something new!